The Docu-leaders project is a social initiative of Vered Osman the Executive Director of the “docuvillage” center, a multicultural center for documentary projects. The project is a unique one in the country which was developed within the framework of the “Galila Fellows”.

The project is an annual project in which 20 teens are selected from all over the Galilee with a common goal of creating short documentary films on various subjects related to their world. At the end of an extensive year of activities in which scripts are written and 4 films are produced, there is a screening of the films in different communities and schools. After the screening, there is a discussion with the young artists.

The youth at the periphery know today that they can make a documentary film in the Galilee. In 2016 it was the first time that an Israeli film, which was produced as part of the project, to participate in an international festival in New York, USA. 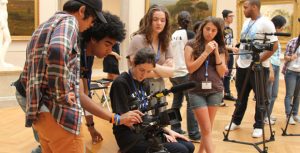